Prior to joining Dynan & Associates, P.S. in 2016 as an associate attorney, Samuel was a sole practitioner in Seattle, Washington from 2013-2016, focusing on civil litigation and bankruptcy matters at his firm The Law Office of Samuel ben Behar. Samuel was highly successful in many of his cases throughout the Puget Sound area with cases in almost every county in Western Washington at every level of State Court and the U.S. Bankruptcy Court for the Western District of Washington.

In his spare time, Hunter likes to golf, read anything with “history” in the title, and travel, unless the Seahawks are playing. 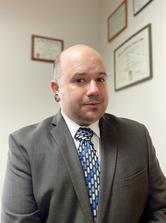 Currently with Dynan & Associates, P.S. he handles litigation for major insurance companies as well as cases for a variety of private entities and pro bono work. He is also currently a Trustee for the Washington State Bar Association LGBT Law Section Executive Committee.